Home/Nieuws/Barren Racer one 690: the winning quad of Dakar 2018!
Previous

After some years of rally racing with quads we concluded that there are no real dedicated race quads available to be used in cross country rally raid racing.

So in April 2016 we decided to develop and build the next generation cross country race quad. The challenges were huge; it had to be a homologated quad for normal use on a road. We had to develop the chassis, electronics and find the best possible parts and wanted to do our ultimate first test: Participate and finish the Dakar 2017 within 9 months after starting the project.

People we know said we were crazy and it would be an impossible mission.

As expected with a completely new designed quad we had our challenges and ups and downs. Like always some unexpected things will occur in a race like Dakar. Especially if the race is as extreme as it was this year. We couldn’t have defined tougher conditions for our new quad to be put through: from sea level to 5.000 meters altitude. From hail, snow and lightening in the high mountains until the dust and ridiculously loose sand at over 45 degrees Celsius, as well as fast liaison routes of up to 700 km on the road.

We are so proud we were able to complete this mission impossible.

After Dakar 2017 we realised some minor modifications on the Barren Racer one 690 rally quad which we tested in April in the Abu Dhabi Dessert Challenge under extreme hot desert conditions. To make sure the Barren Racer will be the machine to beat in Dakar 2018 we will also participated in the other 4 world championship cross country rallies in 2017 which are held in the Middle East, South America and Africa.

The outcome was even for us unexpected and overwhelming: Within 1 year after we completed our first quad, Kees Koolen became the 2017 world champion cross country rally raid for quads on the Barren Racer 1 690!! 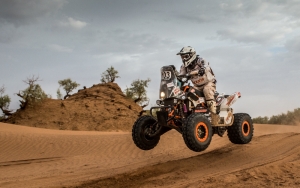 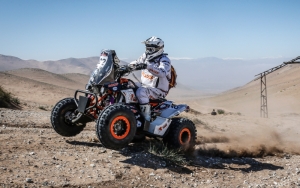 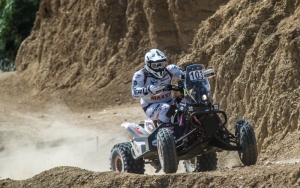